In the summer of 2011, Aurélie Lierman travelled throughout East-Africa in an attempt to capture the soundscape of modern rural and urban Africa in Zanzibar, Tanzania, Rwanda, RDC.

www.africaontape.be is under construction. It will be a growing database of the field recordings then collected. In the meantime you can find here a selection of the compositions, performances and installations derived from that epic trip in 2011 and beyond.

Sampling the Man of Memory (revised 2017) 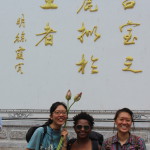 • ASIA ON TAPE is an off spring of AFRICA ON TAPE, started during summer 2017 during a residency at Lijiang Studio in Yunnan, China. Click here for more info !